Posted on October 4, 2017 by sjdeventsltd

Last night I attended the Henley: Literary Festival to hear the talk by Victoria Derbyshire as she spoke about her book ‘Dear Cancer, love Victoria. 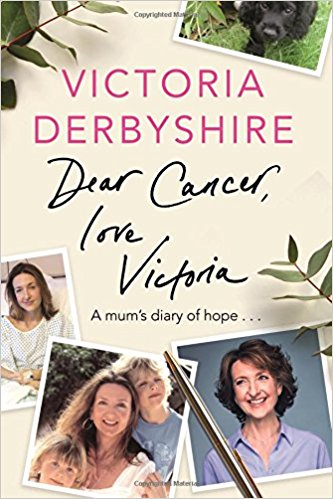 I had arrived early, so I went off to the Bell Book Shop in Henley and brought two copies of the book. One for myself and one for the Friends of the Royal Marsden to put in the raffle for the forthcoming quiz night and I was going to get them both signed which I did.

I took myself off for a cup of tea as I waited for friends and started to read the book.   As I did, I realised that tears were rolling down my face not because I was sad, but because it was like reading my journey and it brought it all flooding back.  My dates were not too different as I found the lump in November 2015, operation on 15thDecember 2015 and started chemo on 23rd January 2016 and finished everything on 4th March 2017.

Some of her comments really hit home from, ‘I went to sleep with cancer and I woke up without cancer’.   Some of her experiences were similar from the importance to work when you could as normality was key.

Telling the family is not easy and telling children must be very hard, not having them myself I was touched.  However for me telling my niece who was 9 years old at the time and only 18 months earlier had lost her Granny so, the word ‘cancer’ was extremely scary for her but once she realised I was going to live and she just has to see me being bald was cool she accepted it.

Something that I also resonated too, as did my dear friend who came along with me was the fact that on being diagnosed you are almost on autopilot and go into the Mrs Efficient mode, though I have always been like that.   After the initial diagnostic, I didn’t plan a wedding or my funeral I was more concerned that they said no travelling and that I may not get to work – my response was well you may as well measure me up and put me in a box now then.   However the wobble I had a few months ago,  I planned a wedding, my funeral and my goodbye emails in the space of 24 hours of self-diagnosing,  something that with the help of massage and physio has been relieved – silly but your brain can play games.   My advice is stay off the internet and let your consultant be your guide.

I agree with Victoria when she said that the hardest part was waiting from knowing you have the Big C to having it removed and whether you will be ok.    Then once you have the operation and it is done, the amazing high you are on, ok it is partly Valium but it’s a high and the first time you are relaxed since knowing you have/had cancer.    Within an hour of coming around I was asking for marmite toast and asking to go home – my dear friend and Anoushka and Hubert hadn’t expected to be back for at least another few hours!

Scarily we were the same age when we were hit with breast cancer and the same type (estrogen) and I just love some of the comments in the book about the menopause brought on by the chemo.

I take my hat off to Victoria having a fear of needles, she self-injected the hormones for the 5 days after chemo, and I couldn’t and took myself to the hospital daily.  Something common for people with low white blood counts.

The video diary that she created has been a real inspiration to so many women and I know charities have approached Victoria as an Ambassador.   It is about ‘talking’ and not feeling you have to whisper about cancer and as she said we don’t whisper I have dementia.

The infamous ‘cold cap’ or as many people call it as it looks a cross between a racing hat and a tight swimming hat though nothing prepares you for the minus 5.   All I can say after 4 sessions I couldn’t use it, the brain freeze for the hours afterwards was too much and I started to loose my hair after chemo 1 so it was bald for me.   Victoria being in the public eye went for the wig and liked to keep the hair which hadn’t fallen out and I know she said that was the hardest part of her journey.   We all have different lows and highs and for me, I went from long hair to medium to short and then off to the barbers and bald and it was liberating.

I think everyone knows the feeling of not feeling like a women when your hair comes out as its not you and I know that I changed the day I went bald.

Victoria also shares how she really valued and absorbed all the special occasions during the treatment and still.   I think it’s only natural to soak everything up and one does occasion pinch oneself and say thank you to my surgeon and the NHS staff, as they saved our lives.

Ooh as I am sitting here reading the book,  refer to  Thursday 31st December where Victoria says she wants to do a ‘thank you’ party, so away and then do something for her local hospital.    Ditto and in September 2016 I did the thank you, I went away in February 2017 and I did the Marsden March in March (half marathon) and I know volunteer.

The wipe out days such as Sunday 10th January, oh yes I remember those putting on a brave face but it messes with your body and makes you feel like crap with a capital C.

The end of chemo was a big relief though it left a void as chair 4 in the chicken factory (my name for it) was to be no longer.

I wouldn’t be a stranger though as I was not giving up my pic line before I had too and I still had Herceptin.

I love the comment on Wednesday 25th May when she finishes her last treatment (radio) and says ‘it’s time to crack on with the rest of my life’.

As I finish the book which is just great, I wanted to share Victoria’s words in her book Dear Cancer, love Victoria.

“Dear Cancer, you don’t define me – you simply took over my life for 301 days (in my case 345), motivating me to talk boldly about you to anyone who would listen.  The more I shared your reality the more diminished you became.  Because talking about Cancer really can help alleviate fear and despair.”

At the back of the book are some of the most heart-warming emails that Victoria received from complete strangers.   A number of them are from people who didn’t make it and if nothing else they are worth a read but have a box of tissues close by.  Yesterday they shared the story of Peter Greenaway who lost his wife, not a dry eye.

I was not in the public eye as Victoria but I worked through my treatment to keep me sane.   But one person, a stranger who touched me was a little girl of no more than four on the bus asking her Dad why I had no hair and he was mortified.  Anyway I asked her to come and sit by her and I explained I wasn’t well and let her feel my bald head.  Then she turned around and said are you going to die like my mummy.  I didn’t expect that and didn’t know how to react, anyway I managed to stay composed and she was a light to me.  I must have seen her further four or five times on my treatment journey and it was special.  I have seen her once since I finished and I just smiled at her.

All I can say is talk and don’t be frightened to ask, whether you ask the nurses or you approach a charity you are not alone.

Their are many charities who offer support but I am biased to The Friends of Royal Marsden Chelsea.