The Wish Tree vs. the Traditional Guest Book

A few months ago a wedding client of mine wanted to do something different, instead of having the traditional wedding guest book so, we embarked on creating and collating ‘wishes’ from the guests instead.

The ‘Wish Tree’, a Dutch custom has been around for about five years however, is just starting to become popular here in the UK as it is different,  can be a great ice breaker and also can become a focal point as part of the celebrations.

A few months ago a client of mine had ‘wish cards’, where guests wrote a message for the couple which were then placed into a wooden box with a magnum of champagne which they would open on their first anniversary.   Though we were sceptical if the magnum of champagne would last that long!

Then, more recently I did a wedding on the 7thJuly where we followed the Chinese custom called Tanabata with a ‘Wish Tree’. 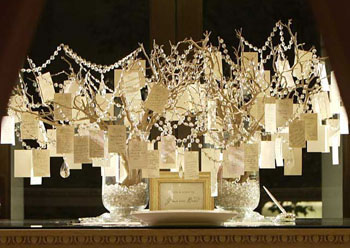 ‘Tanabata’ is a Chinese festival which takes place on the 7th day of the 7th month of the year, when, according to a Chinese legend, the two stars Altair and Vega, which are usually separated from each other by the Milky Way, are able to meet.  So, we had a tree with cards in the shape of butterflies where guests wrote a message for the couple and then they were all collated and placed in a keep sake box for them to read when they got home.

As a Wedding Planner, I think that the wish concept rather than a traditional guest book

is a relatively new idea here in the UK, however it works really well and is fun.    I am looking forward to incorporating a Wedding Wish Tree for over 600 guests into a wedding next month, which I will certainly post about afterwards as the overall theme is secret for the moment.

The concept of the ‘wishes’ is becoming popular and only yesterday while walking through Hyde Park with a girlfriend, we fell up on a ‘wish tree’ created by Yoko Ono at the Serpentine Gallery. 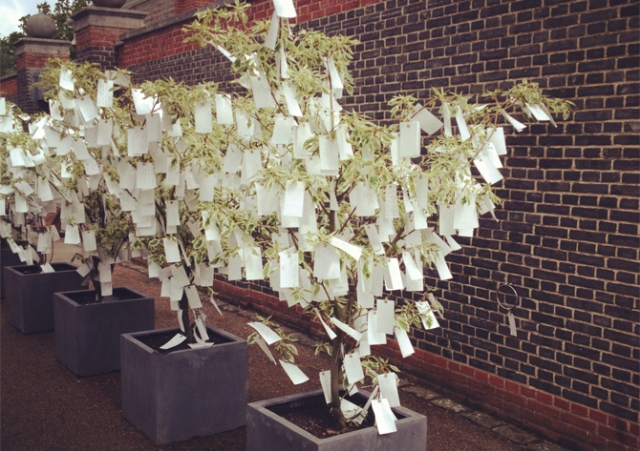 The Wish Trees created by Yoko Ono at the Serpentine Gallery, Hyde Park

So, if you want to do something different at your wedding, why not consider creating a ‘Wish Tree’ for that special occasion.

2 Responses to The Wish Tree vs. the Traditional Guest Book